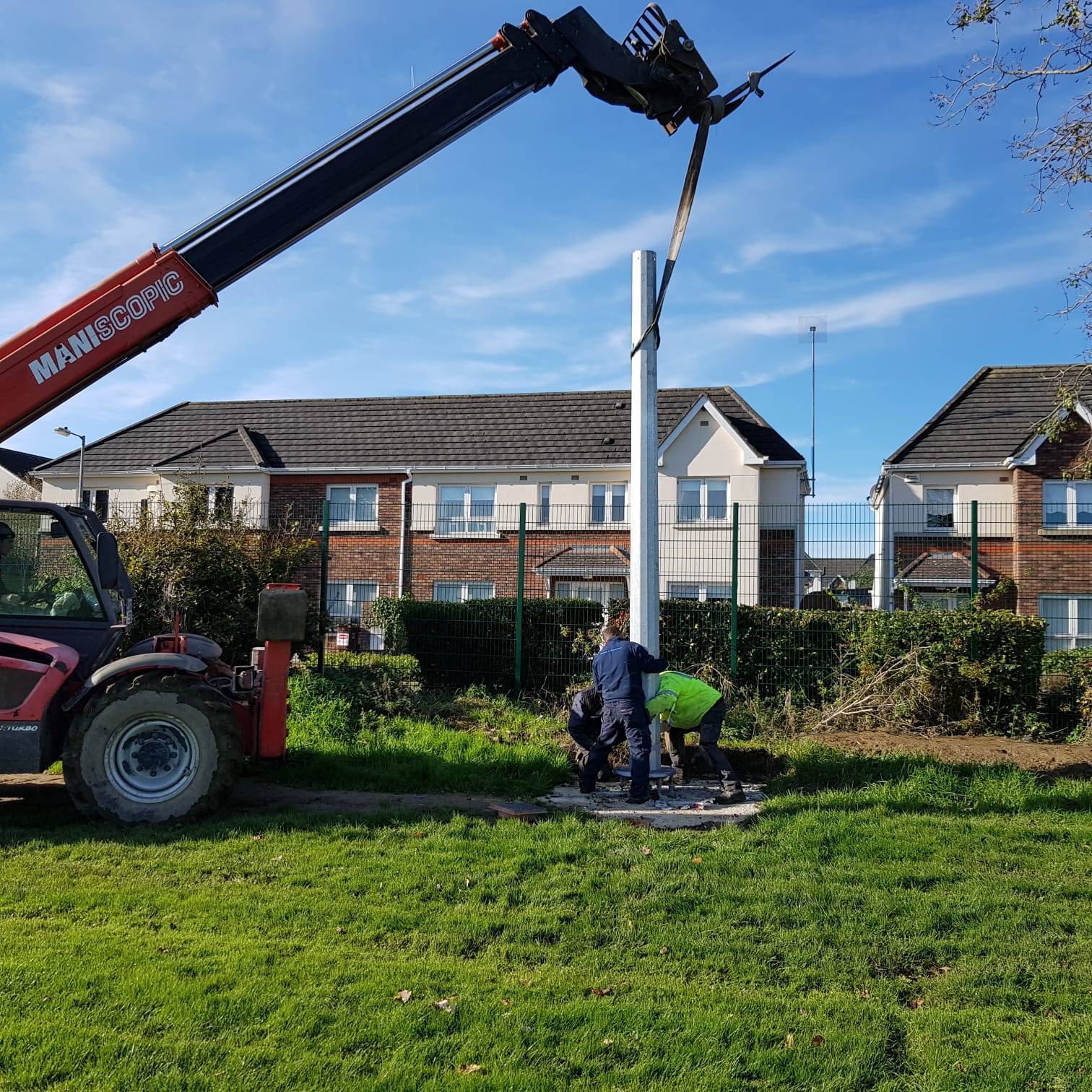 We would like to thank everyone for there support on our fundraising night for our New Floodlights.

As you probably have seen, we are making headway on the installation with our Floodlights and this is also thanks to the lads who are doing this in there spare time.

We are lucky to have skilled people in our club otherwise it would be an other expense to us.

The results to the Race Night Horse owners are as follows;

Each of the following wins a bottle of wine which can be collected in the Kill Gaa Club House any Monday (Tuesday on a bank holiday weekend) from 8:45pm to 10pm

Thank you for your time lads 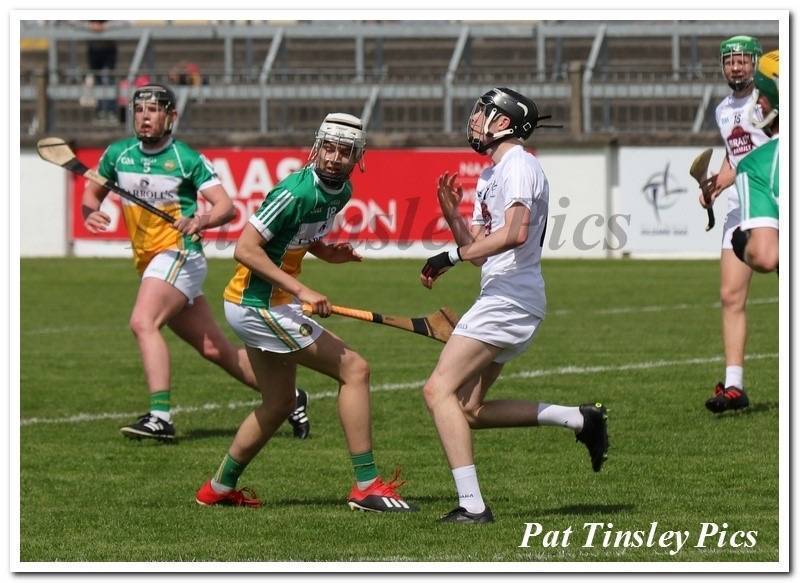 Daragh McMahon (Kill No.17) who had his hurl knocked out of his hand executes a beautifully accurate hand pass over the Offaly back line to the waiting David Qualter (Maynooth).

Fantastic win – the team now advance to the semi-final. 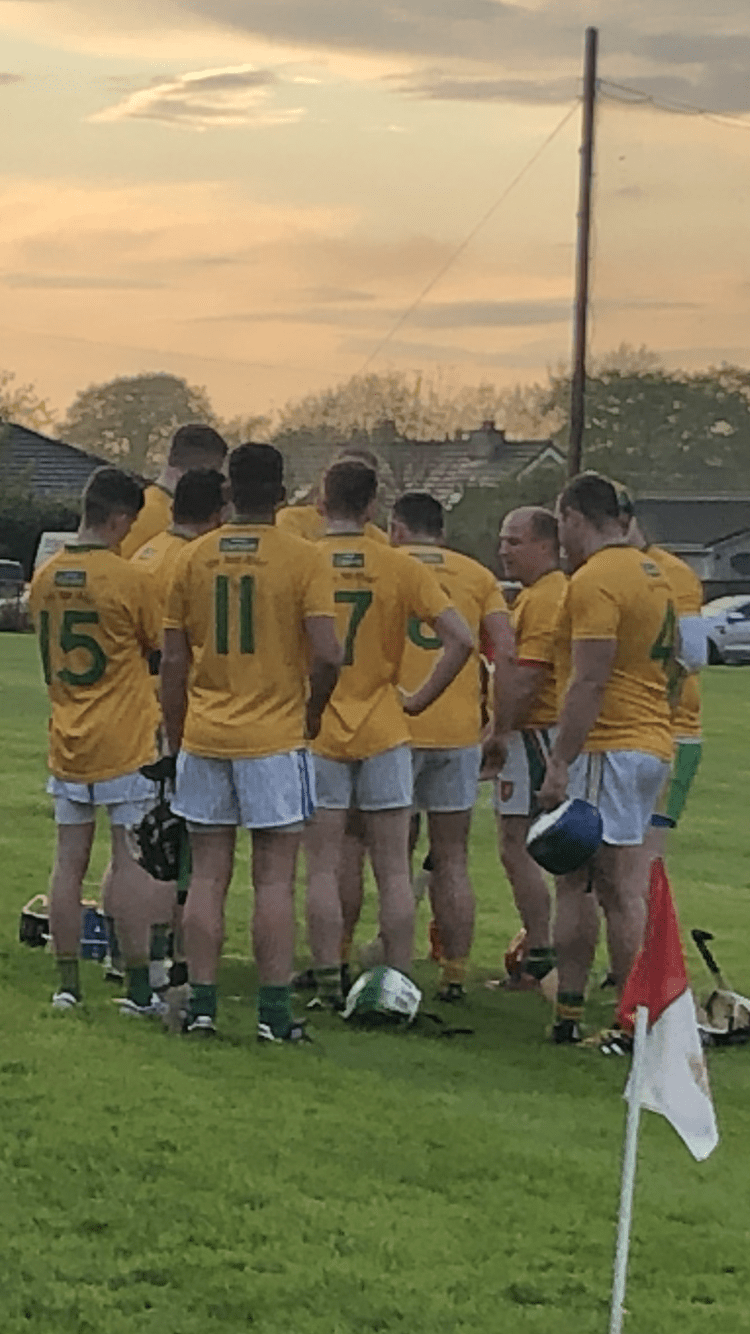 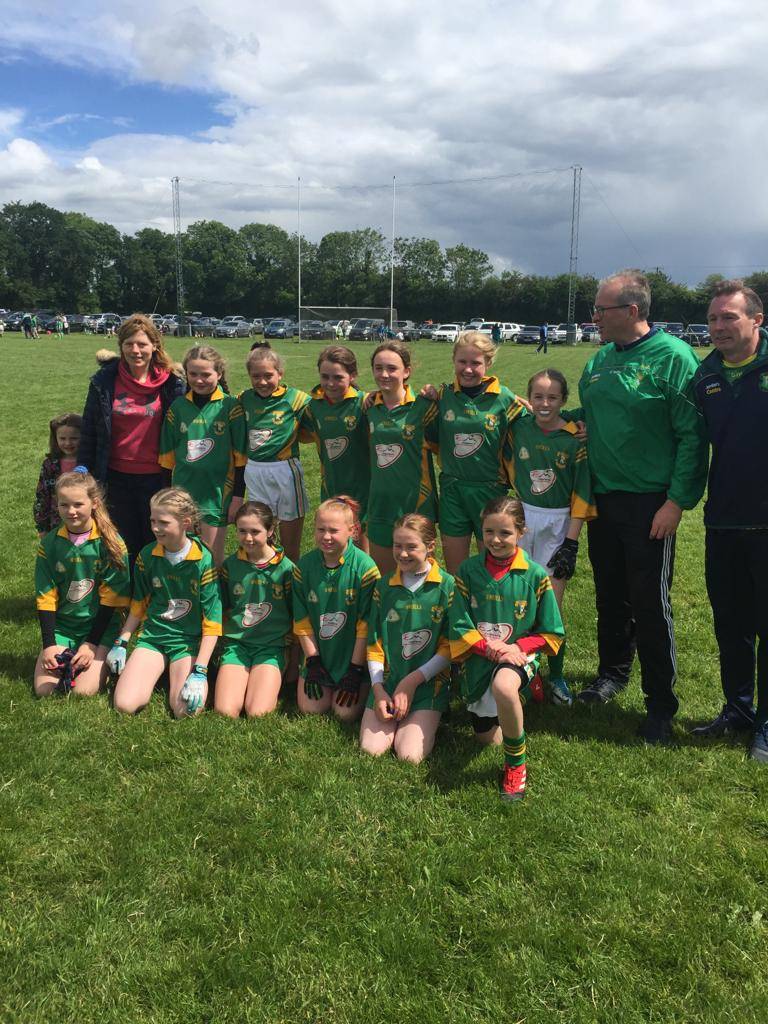 Our Kill girls won all 3 matches in their blitz today Saturday in Ballykelly.

The future of ladies football in Kill GAA is in safe hands. 😃 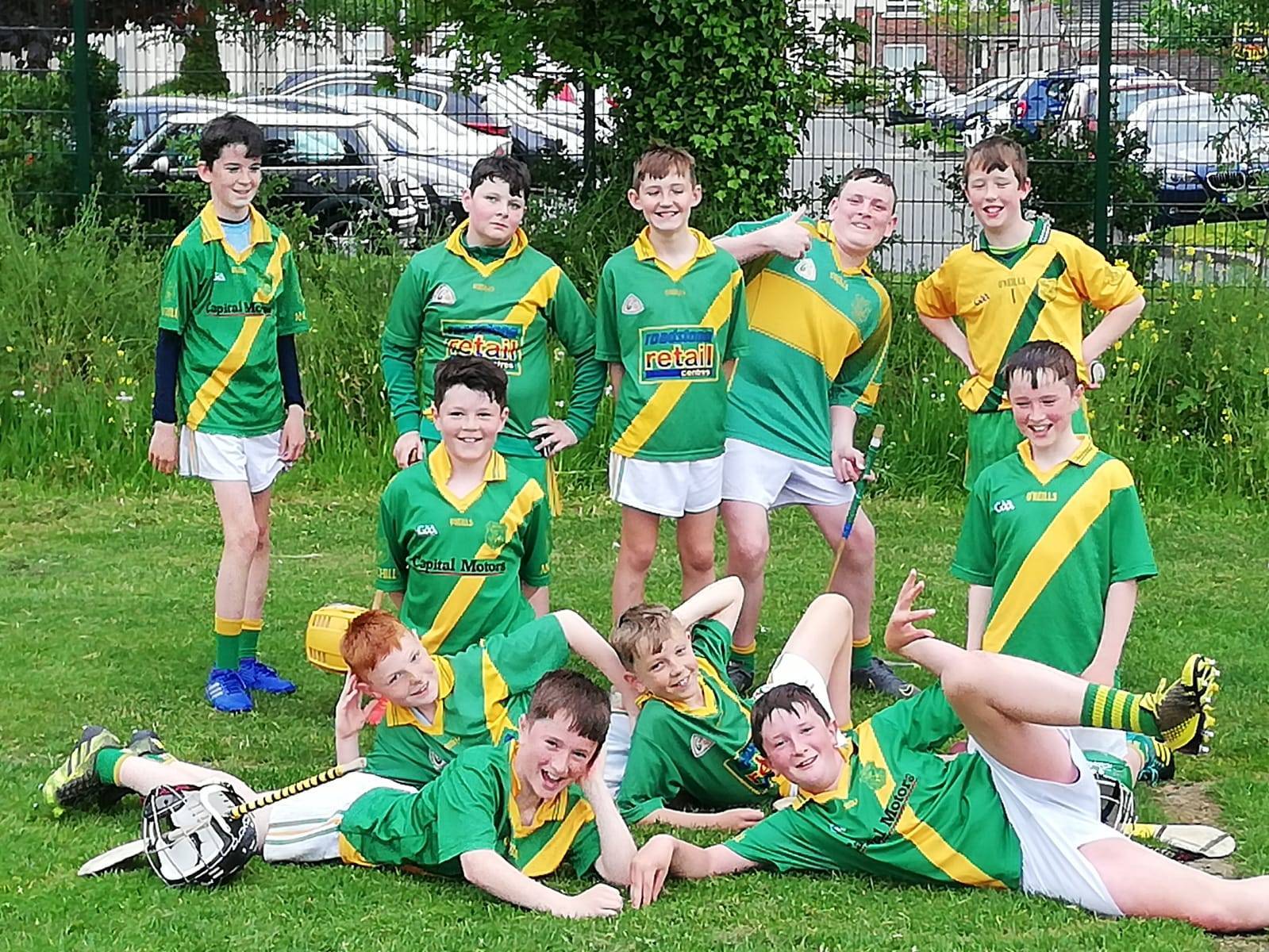 Hard look to our under 12 hurlers on Friday night last.

They lost to Roundtowers by 1 point in the league semi-final.

The boys now go to the shield final next Saturday in Hawkfield.

It was a super game right until the end. The coaches were super proud of the work done on the pitch by all the boys.

Time of the shield-final will follow this week. Check our Social Media for updates.

Our Senior Camogie Team played their league final on Sunday against Moorefield in Celbridge.

From the throw-in, Moorefield was the more determined team and was hungry for every ball. The Kill Girls battled to keep in touch with Moorefield’s constant scoring, but it proved a difficult task.

Although at half time there was only 6 points between the teams it was Moorefield that pushed on in the second half.

Kill team never stopped trying but it was not their day as nothing seemed to go right for them.

Kill’s management team of Rex, Martina, Jackie and Shannon were really proud of the Kill girls and all the work the team put into the league and although it wasn’t their day, the girls came off the pitch tired and leg weary and that’s all any management can ask of a team.

Moorefield finished up the worthy winners.

The Kill girls are already back in training preparing for the Championship with their first match in Kill GAA on Monday 24th June against Broadford.

U13 Football League Division 4 Round 2

U12 Football League Division 3 Round 2 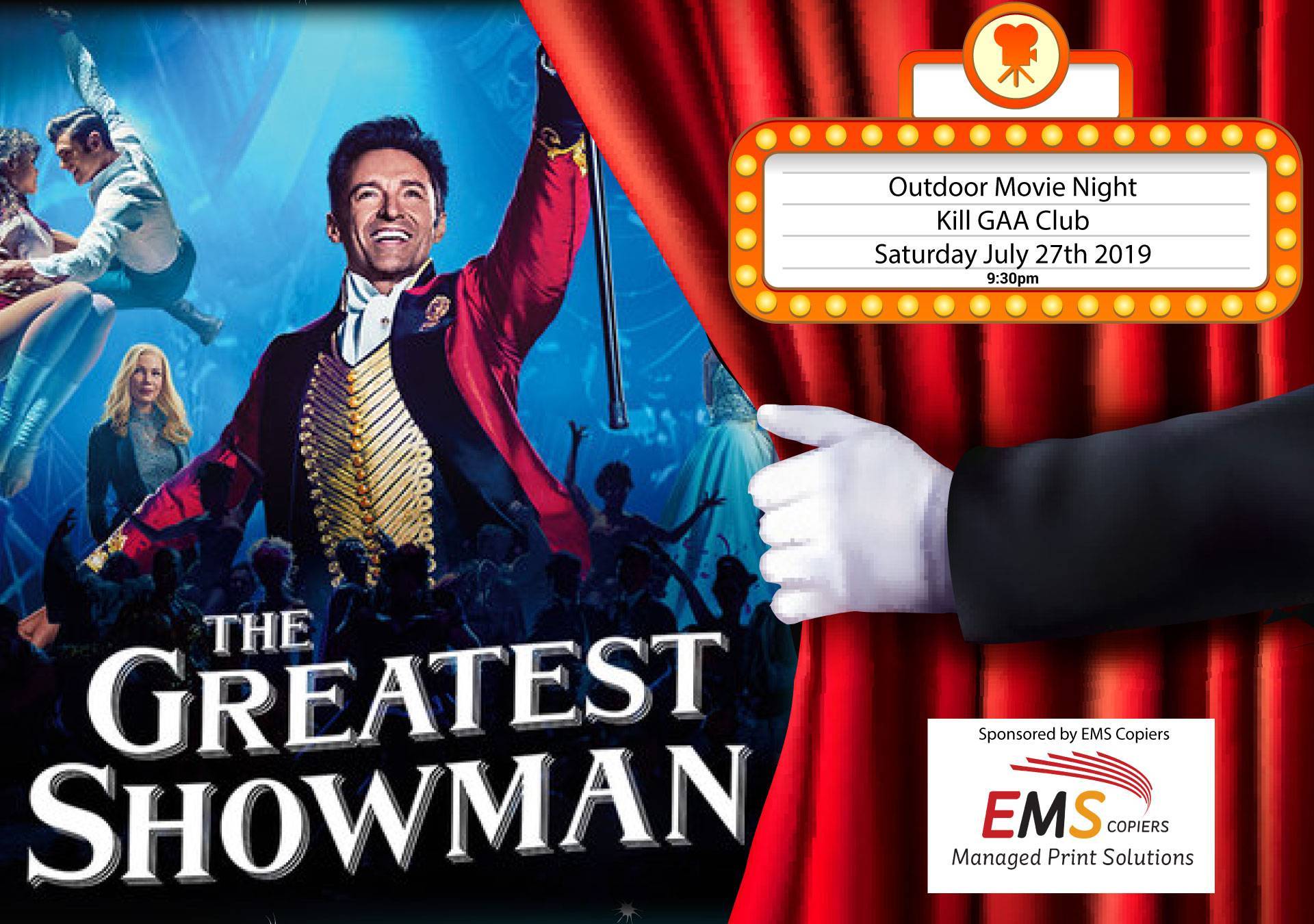 Thank you to everyone who voted for what movie you would like to view.

It was such a close competition with a total of 301 votes. 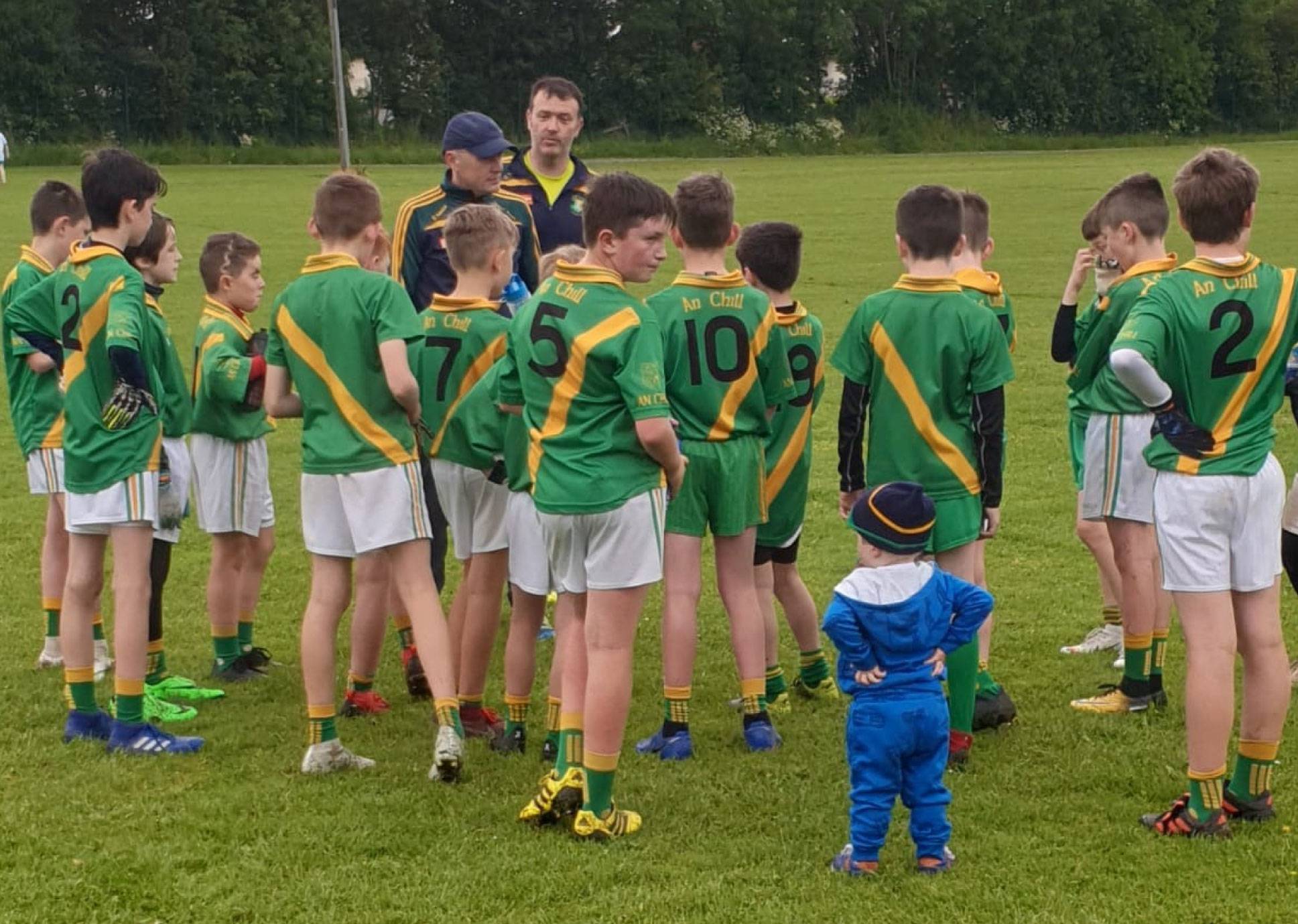 Our U12 boys played Kilcock on Saturday 1st June last in Kill GAA.

At half time there was only 2 point between the teams.

There was no need for Setanta to worry at the half time team talk.  The end score was a comprehensive win for our lads.  Even though our lads were winning by a big margin they played their hearts out until the final whistle.

Not only a win today for our U12 team, but they also won there first game in the Seanie Moore Cup on Wednesday last

Its game after game at the moment, the U12 boys will be competing in a Blitz on Bank Holiday Monday 3rd June.

All support is very welcomed.

Presentation of prizes will be in Kill GAA Club that evening, with food and entertainment all night 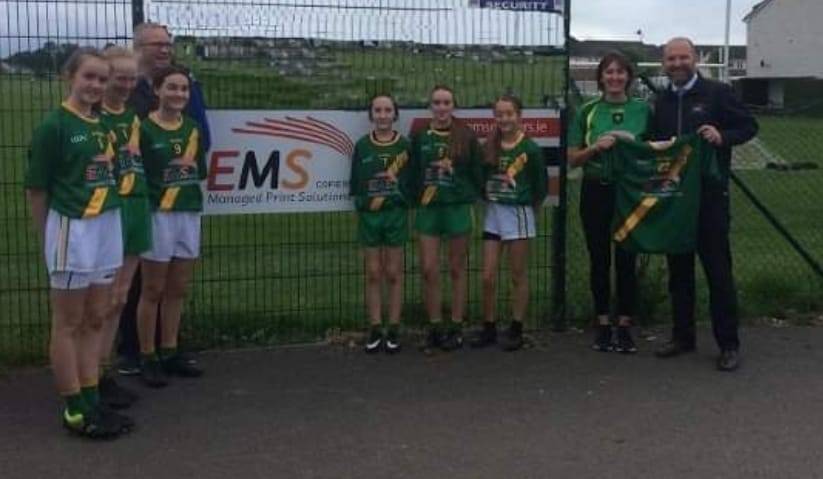 New Jersey’s for our girls

Our U16 football girls were put to the test on Thursday evening last.

Thank you to Niall and Conor from Unit 3 for a great professional workout. 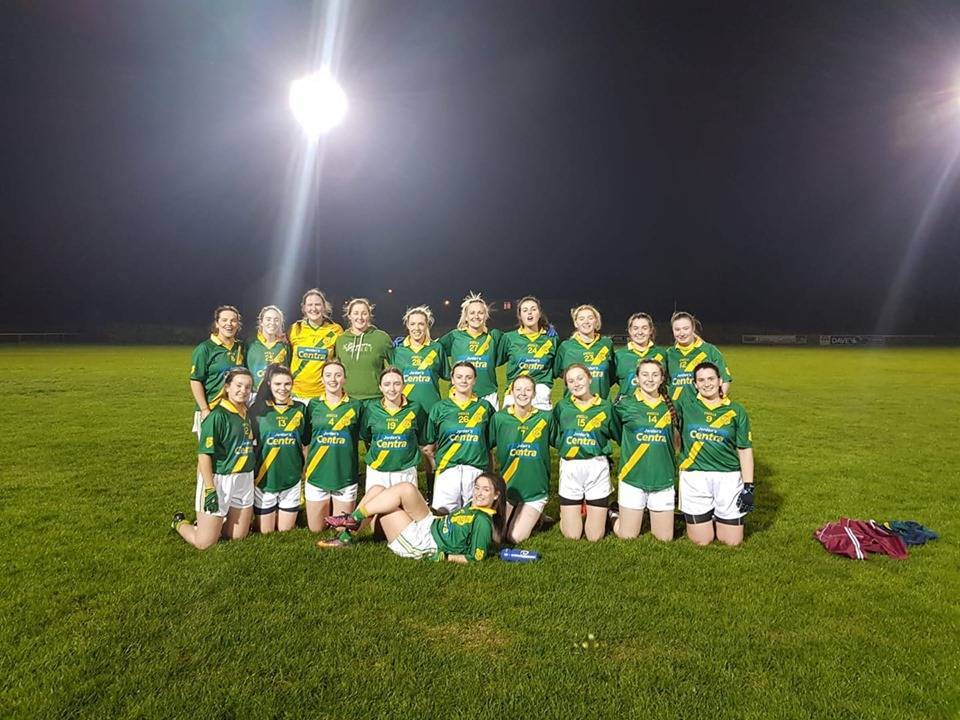 Well done to our Senior Ladies on a fantastic win on round 2 of the Championship on Tuesday 28th last.

Thanks to all the great supporters too. 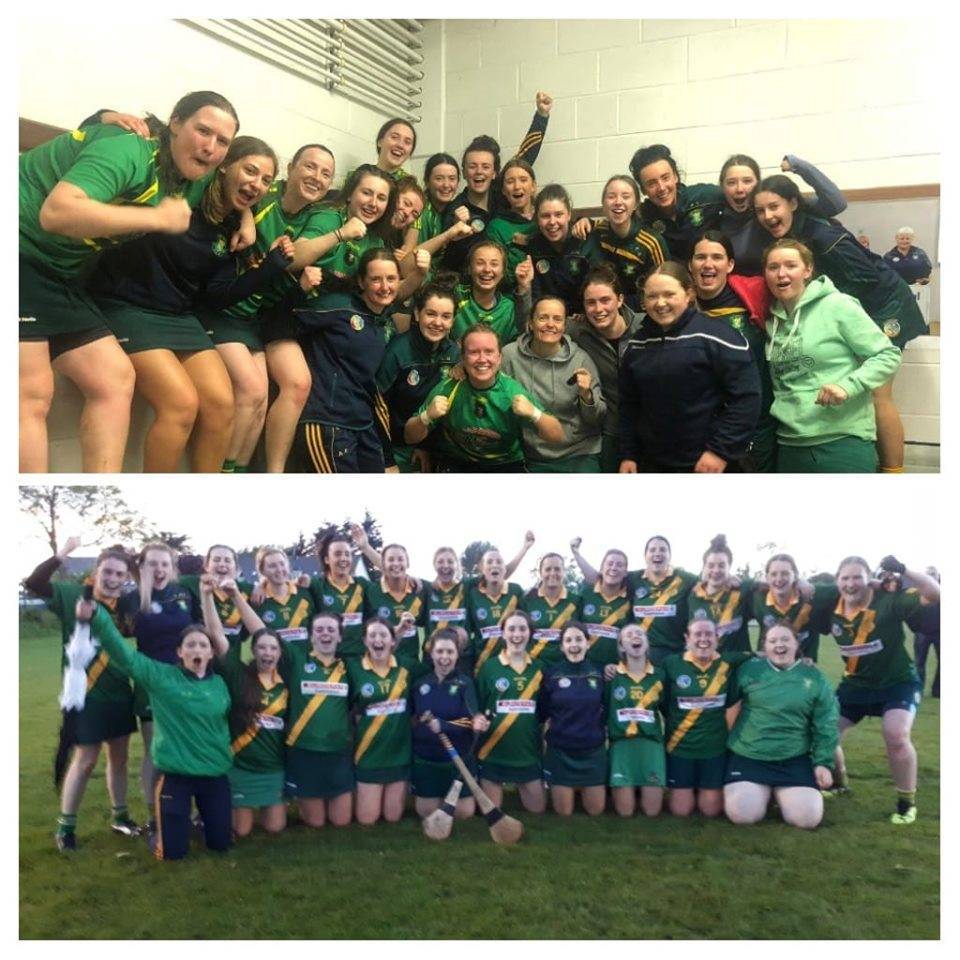 A hard-fought match by both Kill and Cappagh with end to end scores on Monday 27th last.

The match went to extra time after a gruelling second half with both teams determined to win.

Our Kill Girls pulled it out of the bag and came out on top,

Well done girls and huge congratulations to all girls and management for reaching the final again.  You are all an inspiration to our younger teams coming up.  Hard work, determination and teamwork can bring on tremendous results. 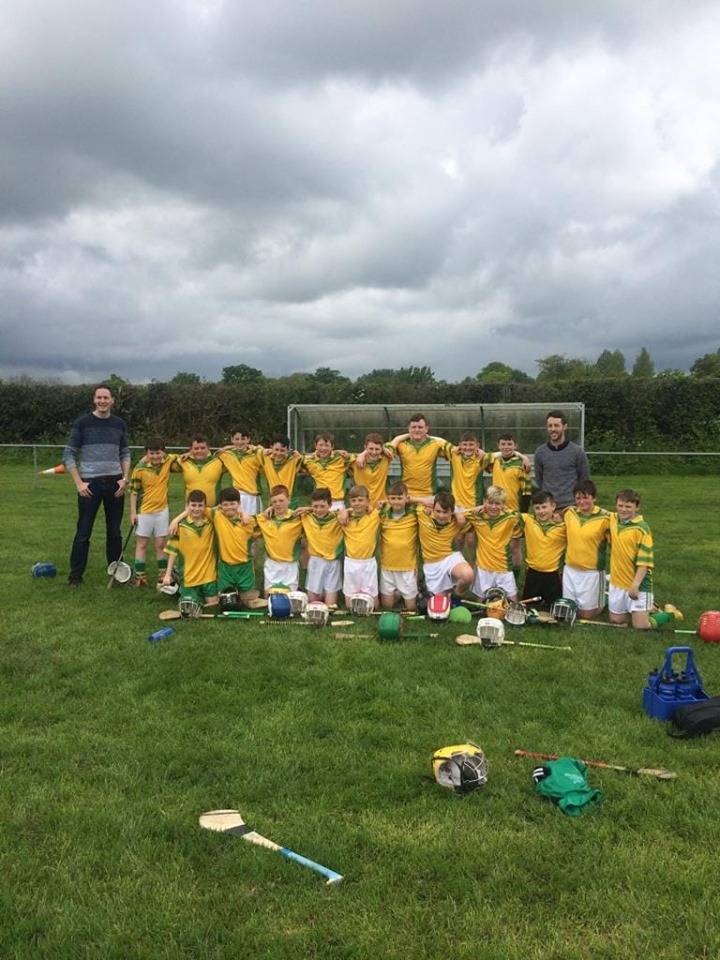 Well done to the lads from Kill National School who played their Quarter Final against Straffan on Tuesday 28th Last.

Congratulations on your win Kill and all the best for the semi-final.

The future for hurling is looking bright for Kill 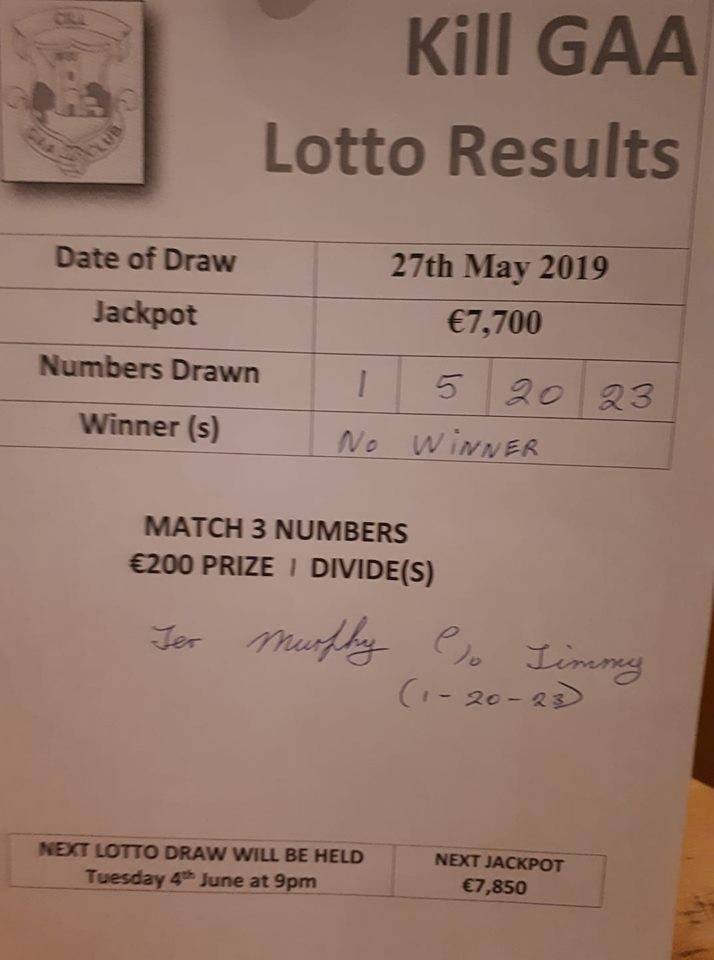 The lotto was not won this week, and we had one person that had 3 numbers. €200 is on the way

This week our Lotto draw will be held on Tuesday 4th June 2019 in the Club House Bar @ 9pm. 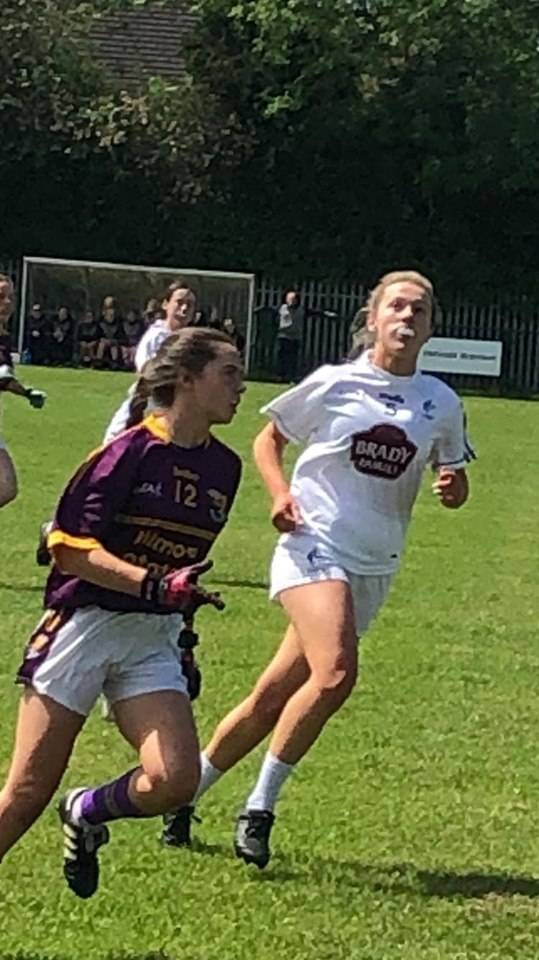 Well done to the Kildare U16s and our own Emma McAleenan on an all-inclusive win over a gallant Wexford side on Sunday 26th last in the Leinster B semi-final. 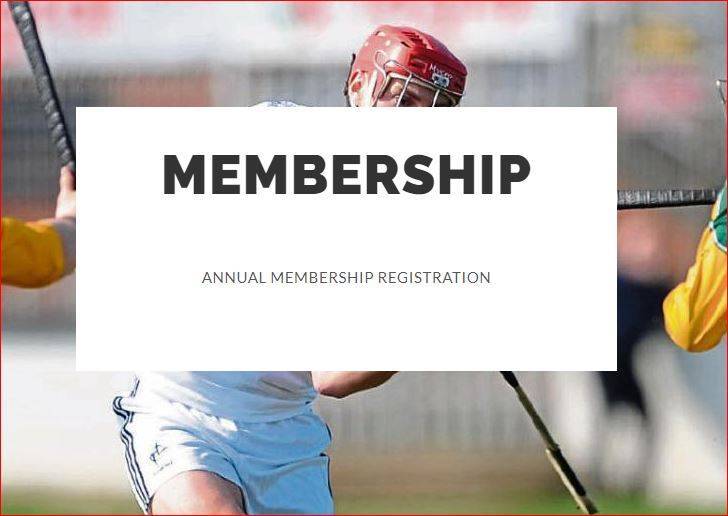 All players and mentors must be registered to play with Kill GAA.

All players and mentors are insured when REGISTERED ONLY.

If you are not registered, please do it now by clicking on the link below or contacting Christina on 085-127 2782 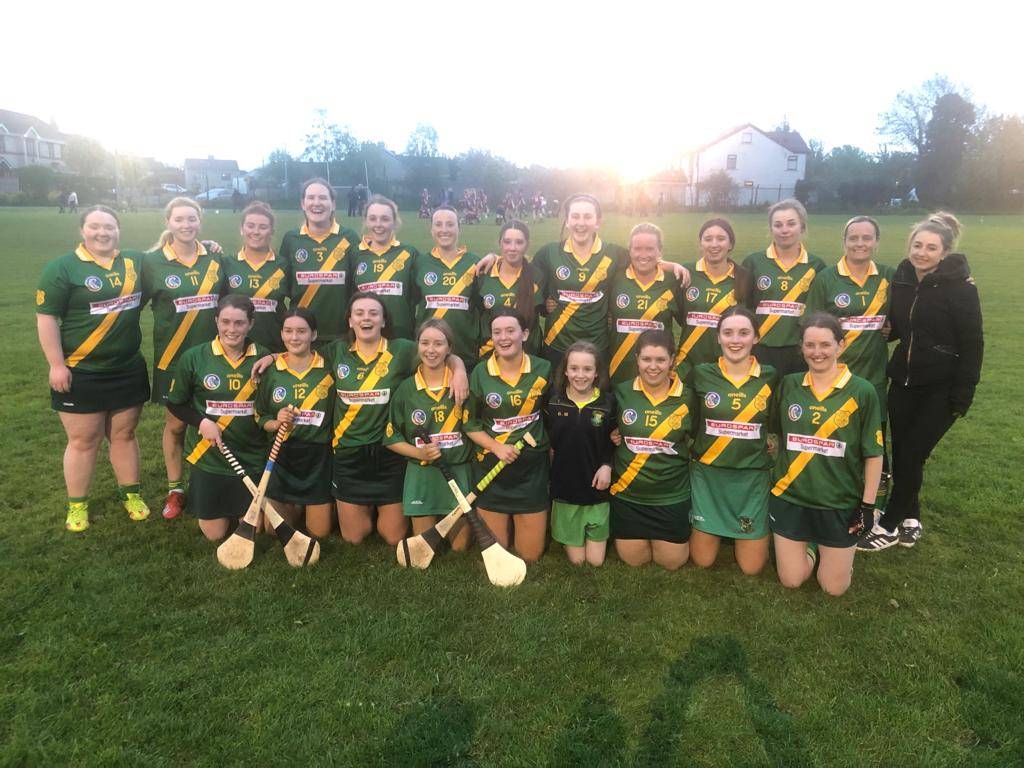 Monday last 20th May turned out to be a training session for our senior girls as Celbridge were not able to field a team.

With our girls placed 2nd in Division 2, they are now through to the League Semi-final.

(First team is at home)

Good Luck Girls and well done on reaching the Semi-final